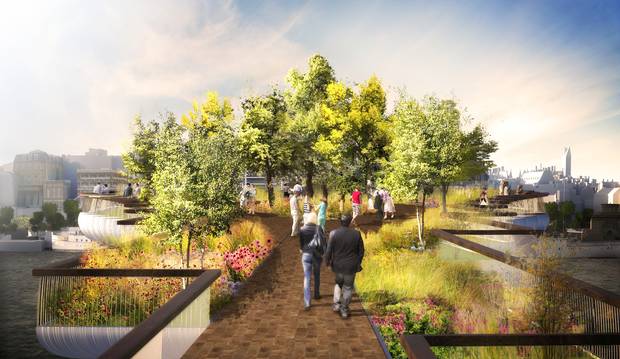 It was announced yesterday that the UK government has pledged £30 million in funding for to make the ‘floating paradise garden’ a reality, offering the final seal of approval.

The idea to create a pedestrian crossing was first proposed by actress, Joanna Lumley and designed by London 2012 Olympic cauldron creator, Thomas Heatherwick.  Ms Lumley first pitched the idea 15 years ago following the death of Princess Diana, but it was not until the 2012 Olympics that she began collaborations with Mr. Heatherwick. After gaining popularity and momentum, about half of the £150 million needed to complete the project has already been raised through private donations and £4 million from Transport for London.

The flourishing oasis suspended above the flowing waters of the Thames will span from Temple Underground Station to South bank and organizers say that it could be finished as early as 2017. Construction would result in a direct link between Waterloo and Blackfriars bridges allowing residents and tourists to easily access cultural centres in the Covent Garden area and south bank. It is believed that the link will revitalize the areas, create new jobs and contribute to the city’s economy.

The gardens themselves will contain plants, shrubs, trees and flowers all suited to London’s climate and will reflect the diversity of the natural world, which essentially mirrors the diversity of the city.  Visitors to the gardens will have the option to sit and enjoy this stunningly unique location, or to walk through on to a further destination while escaping from the city’s busy traffic.

Although this is an entirely new addition to the London skyline, other cities around the world have created similar garden bridges.  The High Line, for example, is a public park in New York City that was created in an abandoned elevated freight line in Manhattan’s West Side.  The park is 2.33 km long and is a treasured escape from the busy streets below.

The new addition to London’s Thames will be yet another tourist attraction and bring more people to the water’s edge.  Now the river can be enjoyed not only from the surrounding embankments or on a boat, but from a quiet, tranquil bridge without the interruption of traffic.

News that the garden bridge has been approved is very exciting for us here at Livett’s.  We look forward to the opportunities to get involved with planning and to lend our expertise gained from past projects such as the Blackfriars Bridge redevelopment project.

This new addition to London’s Thames is a fantastic way to allow more people to enjoy the River!

11 Dec This entry was published on 11/12/2013 at 3:31 pm. It’s filed under River Front Development and tagged garden bridge, livetts launches, River Thames, southbank, temple. Bookmark the permalink. Follow any comments here with the RSS feed for this post.

Older: London Braces for a Storm Surge
Newer: The Festive Season Along The Thames Continues!